I thought I would share with you what the bridesmaids and groomsmen will be wearing on the big day.  It took us a while to figure it all out, but I think it’s going to look great on the big day!

I knew I wanted something in navy and something simple, but it took me a while to pick out *the* dress for the bridesmaids.  I toyed with the idea of giving them a color and letting them pick out their own dress because I wanted them to be comfortable in what they were wearing and to be able to maybe (possibly!) wear the dress again… but navy can be tricky in terms of matching shades, so I ultimately decided to just pick a dress that would look good on all of them (that’s the hard part!) and ask them all to wear that one.

I dragged one of my bridesmaids to our local Bella Bridesmaid and made her try on just about every dress I kind of liked and we ultimately decided on the Magnolia by Simple Silhouettes.  I loved the sweetheart neckline, which I think is flattering on just about anyone, and we both thought the length would be good (not too short, but not too long for a cocktail dress).  It’s going to be all navy (even the sash/belt), which I think will be lovely and allow them to be more wearable in the future(hopefully!).  Here are some pictures of Mer T., my patient bridesmaid, modeling the dress after picking it up and taking it to the alteration place to get it cinched in a bit: 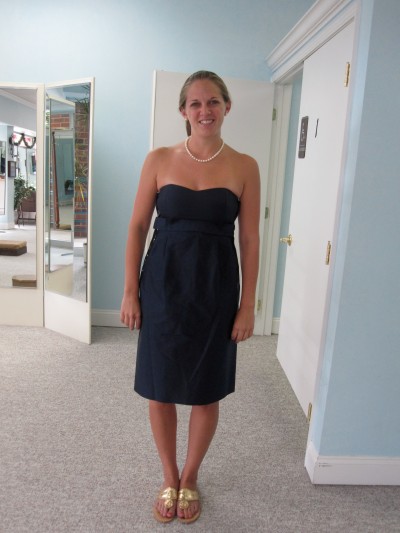 And now for the groomsmen:

Brian and I knew we didn’t want to do tuxedos – they were just too fancy for our wedding and for us (I mean, Brian has worn a tuxedo once in his life).  But since the wedding was in the fall, we couldn’t do the standard non-tux option, the khaki suit.  It was just too summery.  What about a navy suit?  But the girls for sure wearing navy and we were worried that it might be too much to also have the groomsmen in navy.  Then I found these fabulous suits at J. Crew: They look gray here, but they are really a very fine white and faded black alternating vertical stripe.  AND instead of doing the full suit for the groomsmen, we’re going to pair the suit pants with navy sweaters, white shirts, and a navy tie.  This sounded so perfect to Brian and I, and much more us that the traditional wedding suit, though I did worry that it wasn’t “wedding-y” enough – can groomsmen wear sweaters??  But then one of my wise bridesmaids reminded me that it was our wedding and that Brian and I could pick whatever we wanted.  I think it will look nice with what the girls are wearing without being too matchy matchy.  Thoughts?

Brian is still debating about what he’s going to wear.  He thinks he’ll feel too casual if he’s in the same thing as the groomsmen and I’m in a wedding dress, so he’s going to be wearing a new suit, he’s just not sure if he’s going to do the full suit above or a navy suit.  What do you guys think?

How did you know when you found the perfect outfits for your attendants? Have you decided to choose any non-traditional pieces? 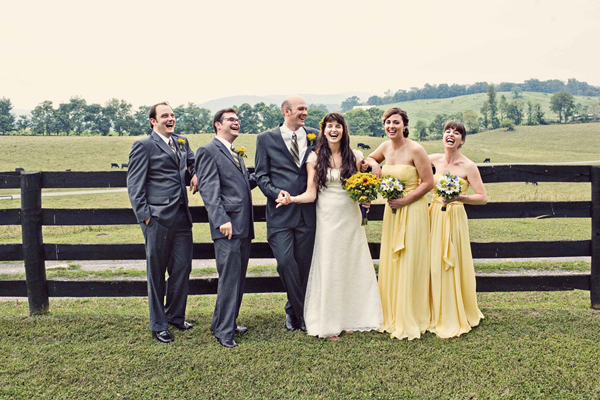 How about a dose of sunshine and a splash of lemonade at your wedding? These pretty hues are sure to brighten the day, no matter what the weather is. I’m loving the cheery yet subdued yellows of these bridesmaids. Not too bright, they’ve got just the right amount of lemon to make your wedding cool and sweet! 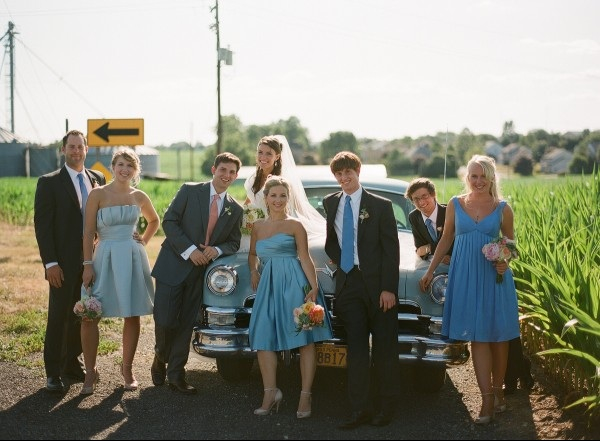 Bridesmaids in Shades of Aqua

I’m a fan of aqua and I’m absolutely loving all the aqua posts here on EAD! When I was planning my wedding, I knew I wanted to use it for my bridesmaids dresses, but there were just so many variations on the color depending where I went and it was hard to pick which one was the right one for me. Here are a bunch of bridesmaids who are dressed in shades of aqua ranging from pale and icy to bright and fun just in case you’re running into similar problems!

Bridesmaids (who should be known as Bridesavers)

Your bridesmaids are the girls that keep you sane.  Wait. It’s not just keeping you sane, but keeping you happy and keeping you focused on you.  They help you remember that your wedding is about you and your love and your life – not ultimately about the welcome baskets or the cake plates or the weather or any people that happen to drive you crazy… They are your saviors.

Last Sunday it really hit me. Not so much the “wow, we’re getting married” part…it was more a realization of how many people are going to be a part of the day. Sometimes I still get so wrapped up in the planning that I forget how cool this whole wedding thing is.

Now that I’ve chosen my bridesmaids (finally!), this weekend I went with one of them to start looking for dresses. I wanted to go the retail route rather than the bridal store route…thought I’d find dresses that we liked better for the price. Not to mention I can’t wait 6 months for dresses to come in.

You Can Wear It Again

Does anyone ever really wear a bridesmaid dress again? {Crickets chirp}

Dresses for the Bridesmaids I Don’t Have Yet

I know, I know…cart, horse, whichever isn’t supposed to come first, whatever. I just couldn’t help but post about the dresses that I’ve been looking at so far as contenders. Really, it’s more the look of these dresses and the colors that stick out to me.

Dressing the Ladies: We Have a Winner!

Alright…we had the beautiful plum v-neck dresses from Nordstrom that didn’t make the cut… and then came the super cute purple and violet dresses from Amanda Archer that won my heart at first sight.

Dressing up the ladies: the search begins

I realize I have yet to tell the story of my own dress-finding adventure…but you’ll have to wait a little bit longer because right now I’m ALL about making my ladies look fabulous!

The “Wear Whatever” Concept

Is anyone who has bridesmaids letting them wear whatever they want? And what I mean by whatever they want, I don’t mean in a color scheme, I mean, they show up in any dress/suit/skirt they have and just stand up there with you? That was my initial thought for my two sisters, who will be standing up there with me at the ceremony. I’m the youngest, and it just felt contrary to my youngest sibling status to dictate what they would wear.

I know most of you have already discovered the amazingness that is Etsy. But aside from a jewelry tree I bought for my mother almost two years ago, I hadn’t made any purchases … that is until I started to plan my wedding.

Julia Gets Her Comeuppance

Some of you may remember way back at the beginning of the blog, when I decided not to choose dresses for my three bridesmaids. I made a bridesmaid lookbook and was so effing proud of myself for… something. Well, pride goeth before a bridal fail.

Who says your girls have to pick one style or one color they like?  Why not have your maids wear different dresses in shades of a color!

Pretty Maids All in a Row:

Since the [intlink id=”4452″ type=”post”]bridesmaid lookbook[/intlink], two of the three bridesmaids have found their dresses.  I was honestly really afraid this would go badly.  Maybe they wouldn’t like the color options, or they’d insist on matching dresses, or my style experts (the bridesmaids) would say this was a terrible idea.  Unfounded worries, all of them.

In contemplating bridesmaid dresses, I’d always had my heart at least half set on champagne dresses. I toyed with the idea of going with a stunning shade of blue, but ultimately loved the sweet sophistication of champagne dresses. My mother initially protested, fearful that it would in someway “detract” from a bride in white/ivory, but swaying her to my side was a rather simple process. After all, it’s pretty hard to deny how chic and classy champagne satin is without even trying. Being a July wedding in Upstate NY, the weather is bound to be insanely hot and with NY summers comes a relentless humidity that is outright miserable at times. Needless to say, I never even considered a full length dress and knew immediately that my fabulous ladies would be fashioned in a knee-length frock of some kind. And with those thoughts in mind, we went shopping.

All that Glitters is Gold

My original plan for bridesmaids gifts revolved around fantastic jewelry. I also have had a few other things safely nestled up my sleeve for months now, but jewelry was the focal point of what I wanted to give my girls. However, after we all fell in love with incredible bridesmaid dresses that cost a bit more than I had hoped, I decided to take care of the girls’ shoes to help reduce their financial obligations. In doing so, I vastly increased my budget for bridesmaid gifts, which gets pretty expensive times seven bridesmaids. Needless to say, I had to scale back the jewelry portion of their gifts, which seemed to be ok given my love for several incredible Etsy sellers. Specifically, in recent months I have really taken a liking to Mia Beads and this amazing necklace in particular.

Happy Thanksgiving everyone! I hope that no matter where you are or whether or not you celebrate the holiday that you are having a wonderful day!

Reader Kerri dropped by today to comment on a dress we’d featured in a [intlink id=”763″]previous post[/intlink].  Unfortunately, we don’t know the designer of that dress but I promised some gray eye candy for her sister, who hasn’t been able to find the perfect gray gown.