Have you heard the news? Greenery is Pantone’s color of the year for 2017! Incredibly elegant and sophisticated, greenery transforms bouquets, drapery, tablescapes, and even chandeliers into woodland works of floral art.

Holiday season is in full swing and with it comes the gorgeous decor of the season, including my favorite, greenery! Incredibly elegant and sophisticated, greenery transforms bouquets, drapery, tablescapes, and even chandeliers into woodland works of floral art. 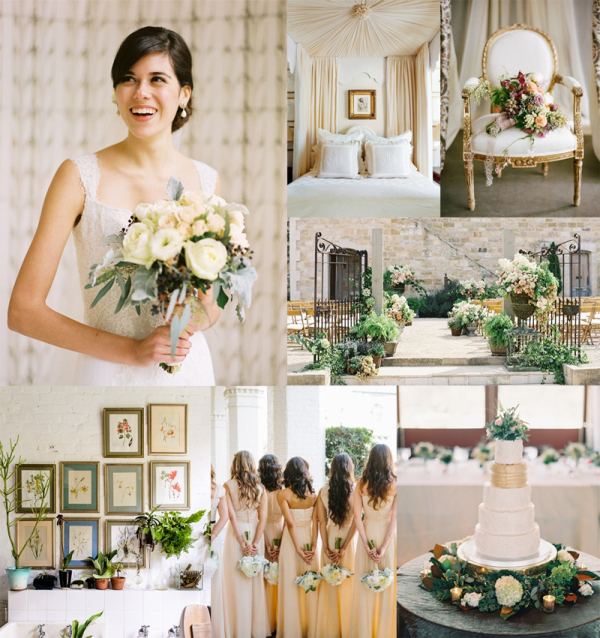 The late summer is glorious, isn’t it? Autumn will be upon us before we know it, and I’m so ready for the elegant colors of the season—ivory, cream, deep shades of green, pale peach, and warm gold. This botanical-inspired board shows that fall isn’t all pinecones and pumpkins!

Pantone has revealed its 2013 color of the year—and we were beyond thrilled to see that it’s the lovely and timeless emerald green! Beautiful whether dressed to the nines or sleek and modern, emerald green is a perfect choice for the classic couple with a dramatic flair. Adding a dash—or a whopping spoonful!—of emerald to your wedding mix results in pure perfection, guaranteed. 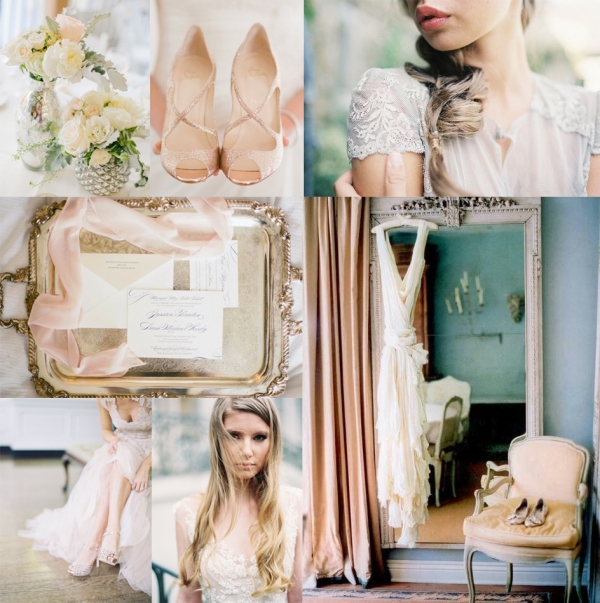 It may be the middle of winter outside, but it’s not too early to dream of spring, is it? We’ve long been inspired by springtime hues—buttery yellow, pretty pastel blue and teal, and shimmering apricot—and today’s board brings them together in an elegant palette that screams romance! Delicate fabrics, fluffy flowers, a hint of sparkle, and flowing locks are just a few of the sophisticated details we are loving about this classic look. Tres chic! 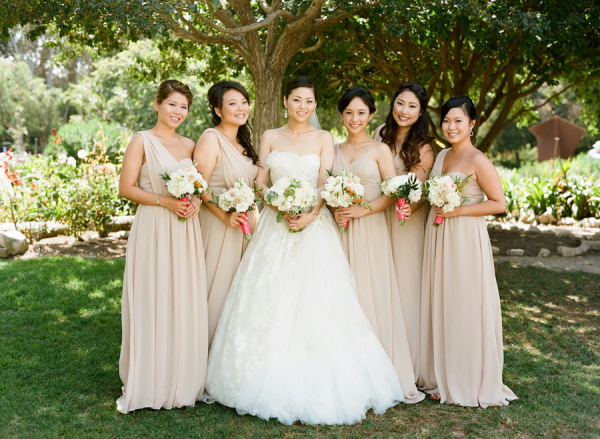 We are completely smitten with Katherine and Andy’s gorgeous California garden wedding! With the majestic trees and greenery of Palos Verdes Peninsula’s beautiful South Coast Botanic Garden as the backdrop, their picturesque wedding is full of understated beauty and sophistication. Elegant yet minimalistic decor from Flower by Kahee echoed the stunning surroundings, with lush white bouquets and reception blooms in delicate apothecary vases. The Grecian-inspired bridesmaids dresses by Atelier are to die for—as is Katherine’s romantic Vera Wang gown—and how lovely are the garlands adorning the cake table and bride and groom chairs? Jenna Kang of Divine D-Day brought the couple’s vision to life, and we love each and every image by Kirsten Ellis of Beaux Arts Photographie! 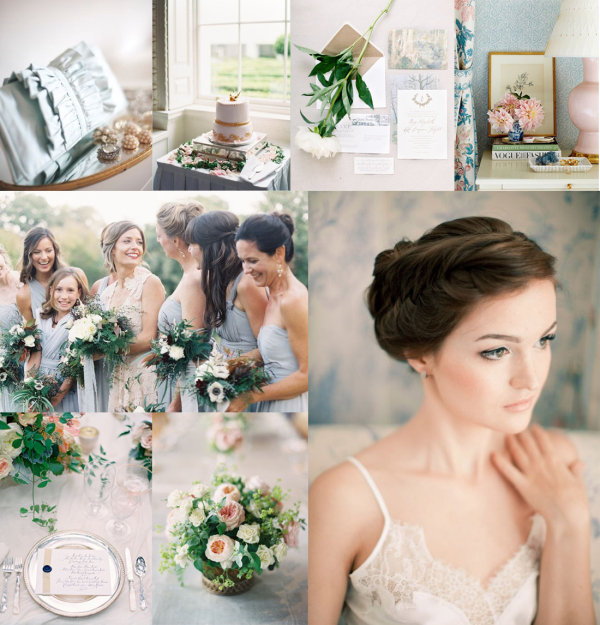 Today’s inspiration board is all about romantic, chic sweetness. The softest powder blue and the most sophisticated blush pair perfectly to cultivate a calm and romantic palette. Ruffles, chiffon, and fluffy flowers are anchor elements, and I love the little hint of gilded gold! 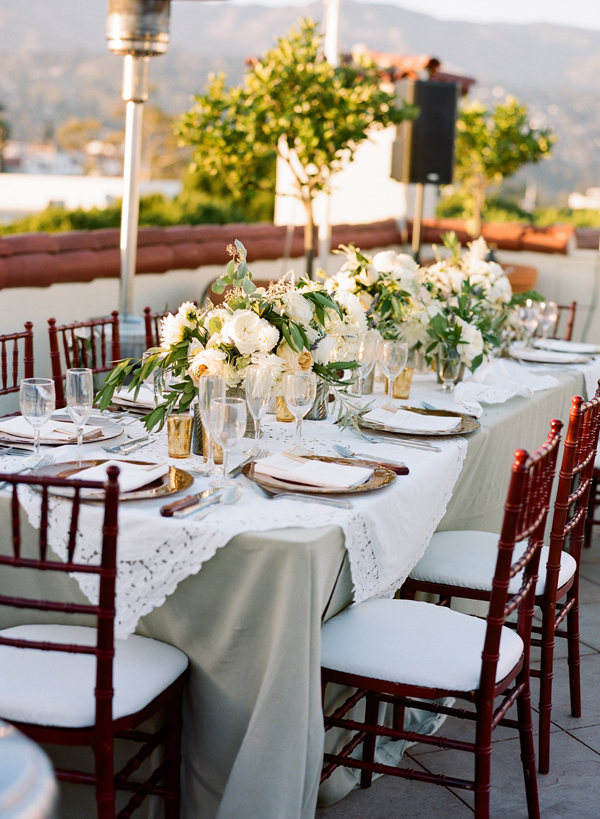 We may be a bit fruit-obsessed lately (figs anyone?), but with all of the colorful autumn fruits, can you blame us? This week we are crushing on the pomegranate, and it’s easy to see why! Poms make gorgeous escort cards, are an interesting and unique addition to centerpieces and bouquets, and their rich pink-red color just screams autumn! 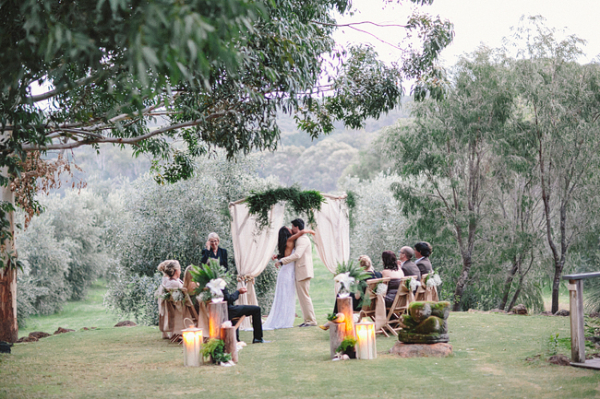 We adore the intimacy of Celene and Dino’s elegant Australian elopement at Empire Retreat! Just ten guests witnessed their vows outdoors in the garden, held beneath a gorgeous rustic canopy. The stunning simplicity of the entire affair is just breathtaking, including Celene’s amazing cascading greenery bouquet from Zinnia Floral Designs. Cathrin D’Entremont Weddings helped the couple realize their dream of a sophisticated, close-knit gathering, and details like glimmering chandeliers above the elegant reception table are perfectly in sync with Celene and Dino’s vision. Celene is stunning in a Wendy Makin Bridal Designs gown, and her maids are radiant in Lisa Brown dresses in shades of taupe and brown. There are so many fabulous details to love—run, don’t walk, to the gallery to see all of the beautiful images from Natasja Kremers!

From vintage jewelry and accessories to table settings, there is something so stunning about aged silver. 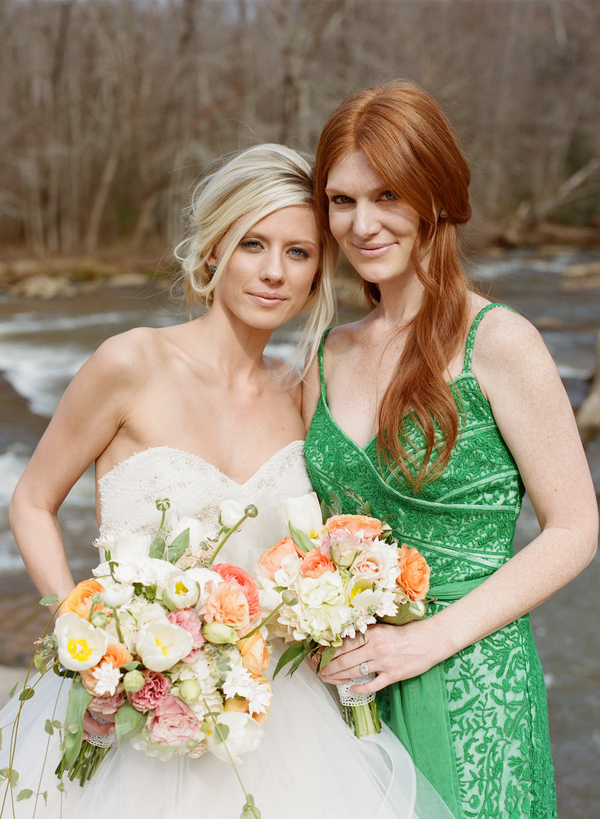 We love the beautiful mix of whimsical and rustic in this lovely emerald inspiration shoot from Abby Wyatt! From the loose, airy florals by Statice right down to the fabulous Zara shoes, each little detail perfectly complements the natural rocky river setting. Unique avian brass vessels add an interesting twist, and the gorgeous emerald bridesmaids gown takes our breath away! See all of the beautiful images from Olivia Griffin Photography in the gallery!

We think that nothing is more lovely than delicate, sophisticated lace. Full of romance, lace adds a feminine and elegant touch to any bridal ensemble, from the veil all the way to the heels! 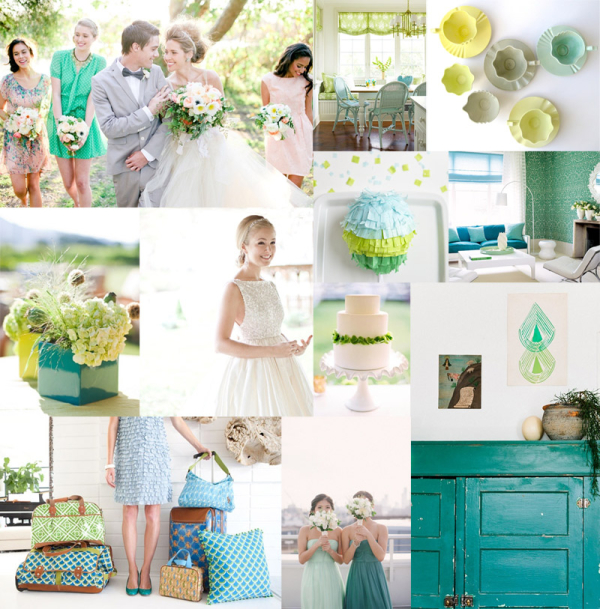 Spring has sprung! We couldn’t think of a better way to celebrate the changing of the season (finally?!) than a fresh and fun inspiration board showing off some of our favorite colors of the spring: fresh green, teal, and pastel chartreuse. This would be such a fun palette for a spring or summer wedding—play with the mix and match colors for a festive, charming, and playful soiree! 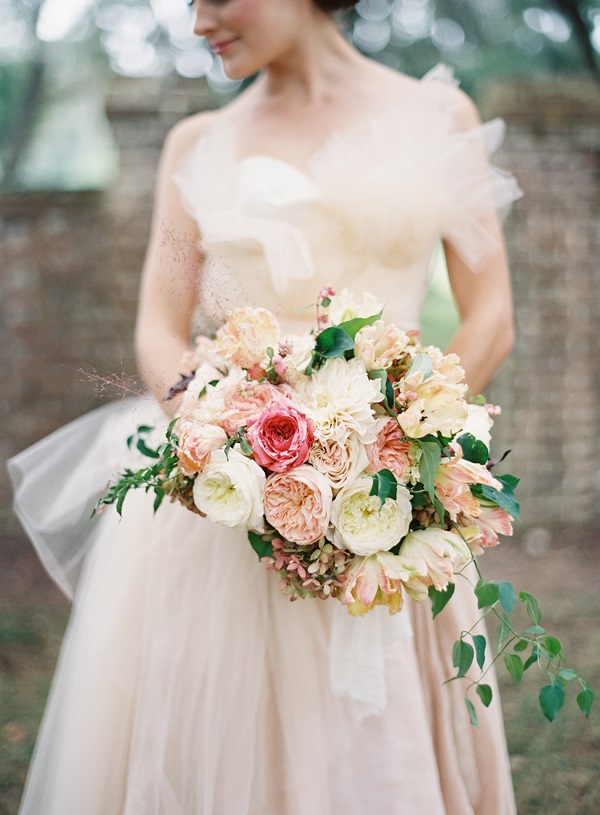 We couldn’t think of any better way to start out a week than this positively gorgeous inspiration shoot from Easton Events and Jose Villa! Inspired by the old world allure of their Charleston setting, Fenwick Hall, the elegant tabletop was set beneath the canopy of a stunning oak tree with dripping Spanish moss. Soft blush and champagne flowers by Southern Blooms by Pat’s Floral Design set atop a beautiful table with fine heirloom china, perfectly polished silver, and flowing linens. An oriental rug and classic calligraphy invitations completed the picturesque scene. We are utterly in love with each and every detail, especially the perfect blush Carol Hannah gown! See all of the stunning images in the gallery! 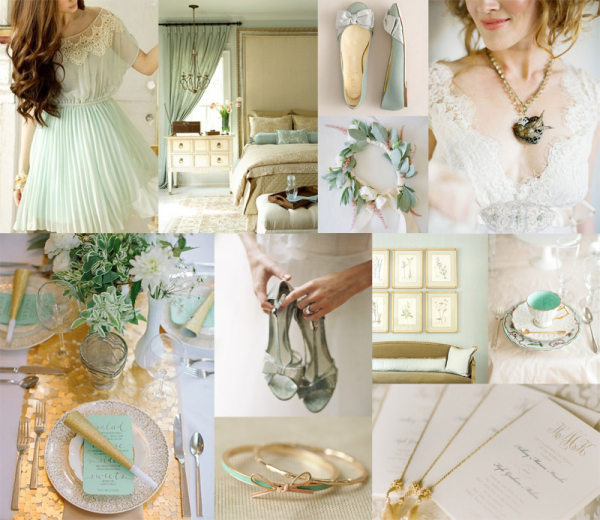 Soft and elegant, mint green has long been one of my favorite colors—and paired with touches of ivory and gold, it couldn’t be more beautiful for a spring or summer fête! The gold accents provide sparkle aplenty (but subtly, think morning wedding!) while romantic lace, bows, and dainty teacups are just delicate enough to add a feminine touch. Absolutely smitten with this color palette for a wedding, party, or even home decor! 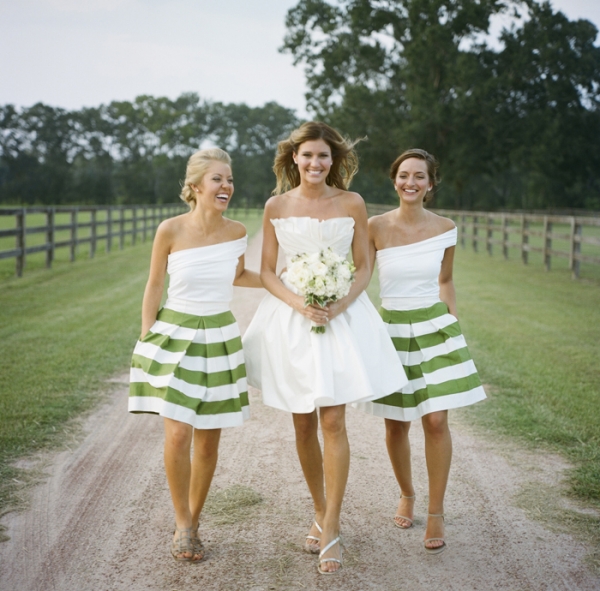 This shoot, created for V4 of the fabulous Southern Weddings magazine, has just about every fabulously preppy detail you can imagine: Seersucker, monograms, magnolia leaves, a green and white color palette, and it was even all inspired by a polo match! While the impeccably styled tablescape by Calder Clark Designs has us craving a mint julep, it’s the fun, striped bridesmaids’ outfits that make us do a double-take! They are so cute and definitely something your ladies could wear again. We can’t say enough how much we love this amazing styled shoot, but be warned: these images by A Bryan Photo could quite possibly make you to stop whatever you’re doing and search for the nearest polo club! 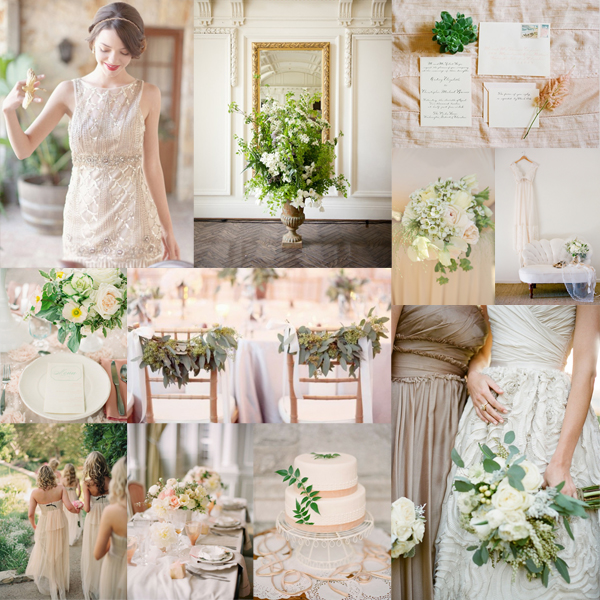 You know well by now that we go weak-kneed for color palettes that are soft, elegant, and feminine—and nothing fits the bill more than the timeless choice of pale blush and olive green. Generous hints of rose gold abound, and garlands and sprigs of olive branch accompany lush arrangements of peonies and garden roses. Completely romantic and timeless!

There may be nothing we love more than classic hand lettering. Whether it’s that little moment of joy when we see a thick, luxurious hand-addressed envelope in our mailbox, or that lovely keepsake escort card from our best friend’s wedding, we simply swoon over calligraphy details both large and small! At the top of our list? Elegant white ink. Beautiful on paper from soft dove to bold black and every color in between, white calligraphy is our current crush! 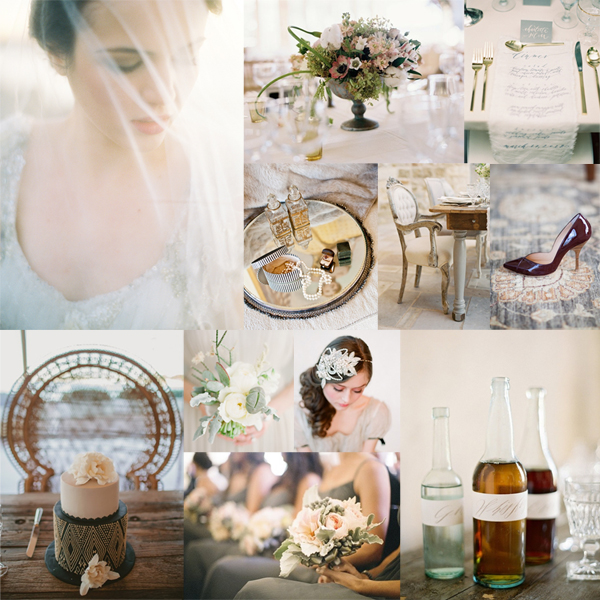 Gray, amber, gold and garnet—the perfect palette for a winter fête! Gray cools down an otherwise warm rainbow of hues that are at once classic and a bit bohemian. We love the idea of dressing bridesmaids in long, gray dresses while reserving the other colors for centerpieces, details, and of course, a fabulous pair of shoes! 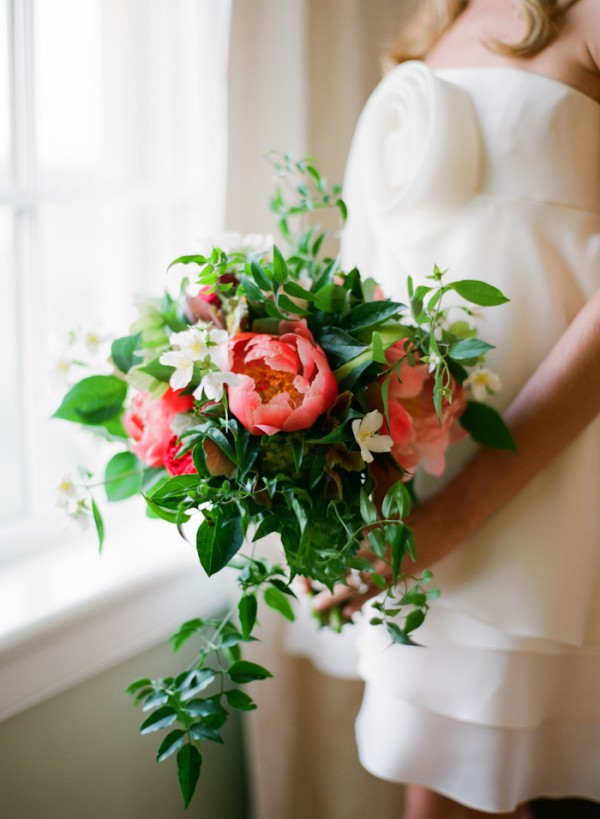 This gorgeous styled shoot has it all: an absolutely stunning gown from Carine’s Bridal Atelier, Valentino d’Orsay pumps, and the simply breathtaking setting of Keswick Hall at Monticello near Charlottesville, Virginia. The rolling green hills provide a lush backdrop for bold pink and green blooms in bouquets and centerpieces created by Pat’s Floral Designs. We are head over heels for the classic Southern charm that Just a Little Ditty created in this beautiful setting, and the gorgeous images from Jen Fariello Photography!